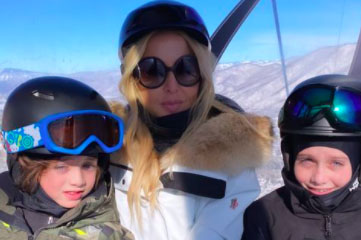 Rachel Zoe’s 9-year old son, Skyler, was back on the slopes by Christmas Eve following his terrifying recent 40-foot fall from a chair lift.

“And here we go with mom super anxious but not showing it for Sky…he is so brave and back on the horse…or…mountain,” Zoe, 52, captioned a post on her Instagram Story on Thursday.

The designer also shared a video of herself with Skyler, husband Roger Berman, and their other son, 7-year-old Kaius, heading up the mountain on a chair lift as they vacationed in Aspen. In the video they all wished fans a merry Christmas Eve.

But things took a turn when Zoe got injured herself while keeping an extra close eye on Sky.

“I did something i never do and fell hard while i was watching Sky instead of my strail sooo…” she wrote in her story, adding, “Now going in and in agony and…is this a sign?”

Friends and fans expressed how happy they were that Sky was feeling better after the accident.

Rachel Zoe after her fallInstagram

“Thank God everything worked out. Skyler is a true star!!” Tommy Hilfiger commented on her post. “I can’t imagine how mommy and daddy dealt with it but I can only say that karma is on your side.”

She responded to Hilfiger, writing that a “true angel watched over our brave little Sky!!”

On Monday, Zoe revealed that Skyler had gone to the hospital after falling from a ski lift.

“Sky is in great spirits but sore and banged up a bit otherwise a brave champion. Mom and Dad scarred for life,” she said, posting a photo of her son from the hospital bed.

Earlier this week, Sky gave an update on his health.

In a video posted to Zoe’s Instagram account, Skyler said he can walk, run and “go upside down,” while rolling himself into a ball on the couch.