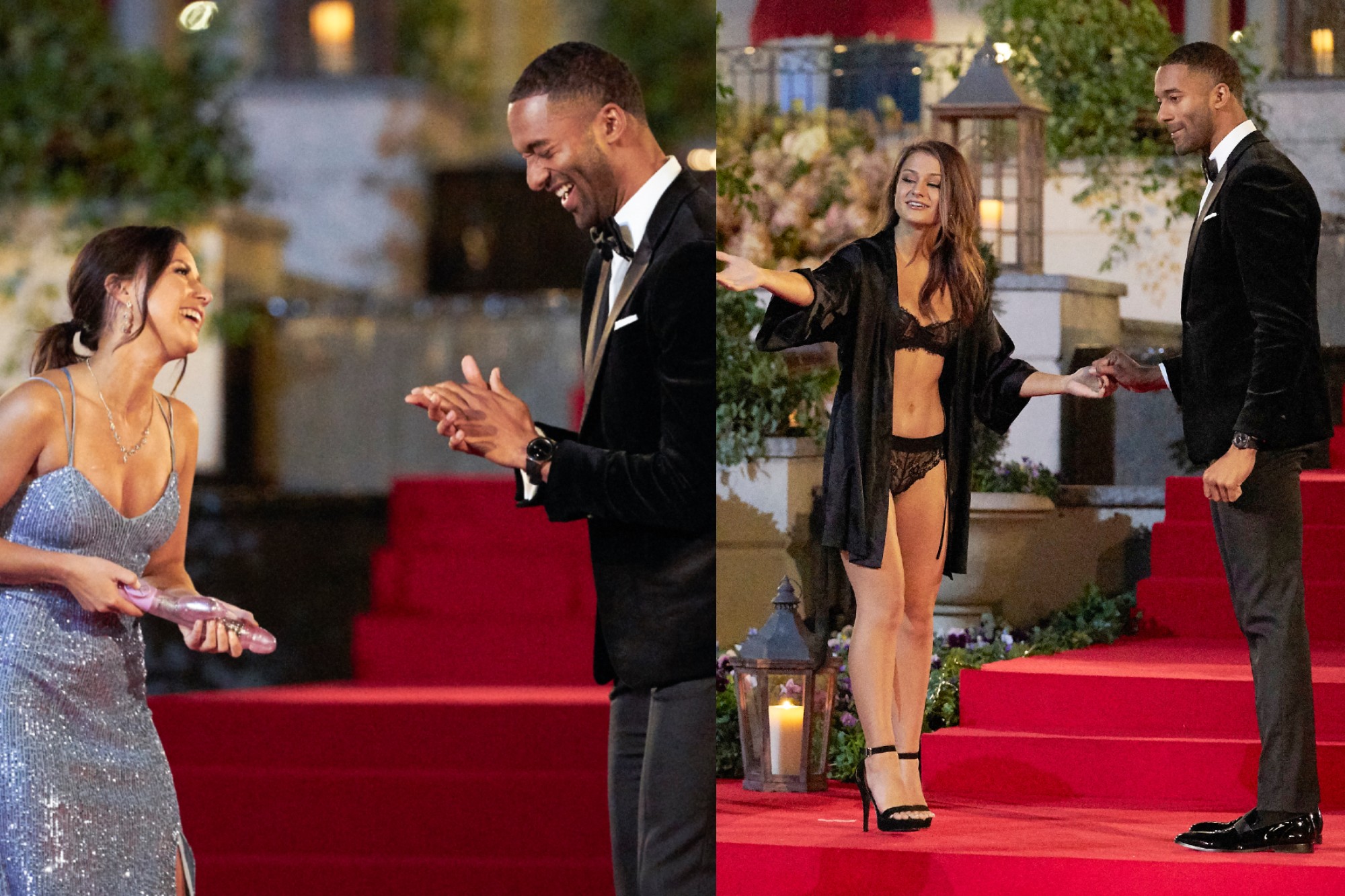 Walking thirst-trap Matt James has taken the reins as the sexiest man in America for the next few months with the start of Season 25 of “The Bachelor.”

Though they’re on the cold East Coast (Bachelor Mansion has temporarily moved to a luxury resort in Pennsylvania), this season looks spicy with drama. And lucky for us, it comes just 13 days after the finale of “The Bachelorette.”

Here’s what went down on night one.

Unless you follow Tyler Cameron — Matt’s BFF — on Instagram, most longtime viewers were unfamiliar with Matt before tonight. He’s biracial and was raised by a single mom in North Carolina. He played football at Wake Forest University, lives in New York City and volunteers with children. He’s the first black Bachelor in history, and that’s weighing on him: “I don’t want to piss off black people, I don’t want to piss off white people,” he told Chris Harrison.

Do we think Victoria watched “The Crown?”ABC

Thirty-two women quarantined for weeks and took four COVID-19 tests in the hopes of sharing droplets with Matt. There were some genuine winners, such as Mari: “You ever meet someone and you just don’t know what to say?” Matt said after she walked away. Magi came all the way from Ethiopia to be on the show.

Chelsea wore the hell out of her gown.

Many went head-to-head in an apparent competition for the most absurdly-spelled names — looking at you, Pieper, Khaylah and Kali. But this is a competition for love, not misplaced vowels. In this column, we’re focusing on the schticks performed to grab Matt’s attention:

Anna brought him a survival kit with actual “red flags” for him to wave at women.Khaylah, who is from North Carolina like Matt, arrived in a pickup truck.Alicia, a ballerina from NYC, danced her way out of the limo.Alana brought spaghetti and gave him a “Lady and the Tramp” kiss. Kali walked up in a lace bra and panties. Matt helped her pick between two gowns. “Damn,” he said as she walked away. “You gotta love a woman with confidence.” MJ tried to drive up in a pizza delivery car with a pie in hand but got locked out. Katie brought Matt a vibrator “because it got her through the pandemic.” Kimberly brought a big fish and threw it at Matt for a reason I don’t understand.“Queen” Victoria was carried in on a throne and wore a tiara — and then she fell walking up the steps.

Sizing up the competition. ABC

As an introduction, Matt led his ladies in prayer instead of a toast for their journey. Then the women headed into a “can I steal him for a sec” war. God bless them.

Khaylah continued to milk her hometown advantage, sharing a toast of sweet tea with her man. “Princess” Kit tried the same strategy, gifting him an NYC-themed snow globe — though Queen V squeezed her out and then harassed some ladies for not getting alone time with Matt yet. I’m going to go out on a limb and say that this one isn’t here to make friends. She’s working overtime for the villain edit.

Bri and Matt bonded over their similar upbringings: She’s also biracial and was raised by split parents.

But it was Abigail who stole his heart: After revealing that she is partially deaf and wears cochlear implants, Matt was honored that she opened up to him. He couldn’t take his eyes off her, and they kissed.

No surprise, this one also went to Abigail.

How many shots did it take them to get this pic? ABC

A bunch of really solid ladies got roses like Bri, Mari, Chelsea and Kristin. But *collective groan* Victoria also got one. At least we know upfront who is here solely to stir up trouble in the house — but they usually don’t make it past week five.

I think the first one-on-one will go to someone who got Matt’s attention but didn’t get a ton of time with him tonight, such as Chelsea. But the promos showed more women coming in and lots and lots of crying, a real mess of the producers’ making. Buckle up.

Publicist now says Tanya Roberts is alive after all
All about Abigail Herdinger, ‘The Bachelor’ contestant
Comment