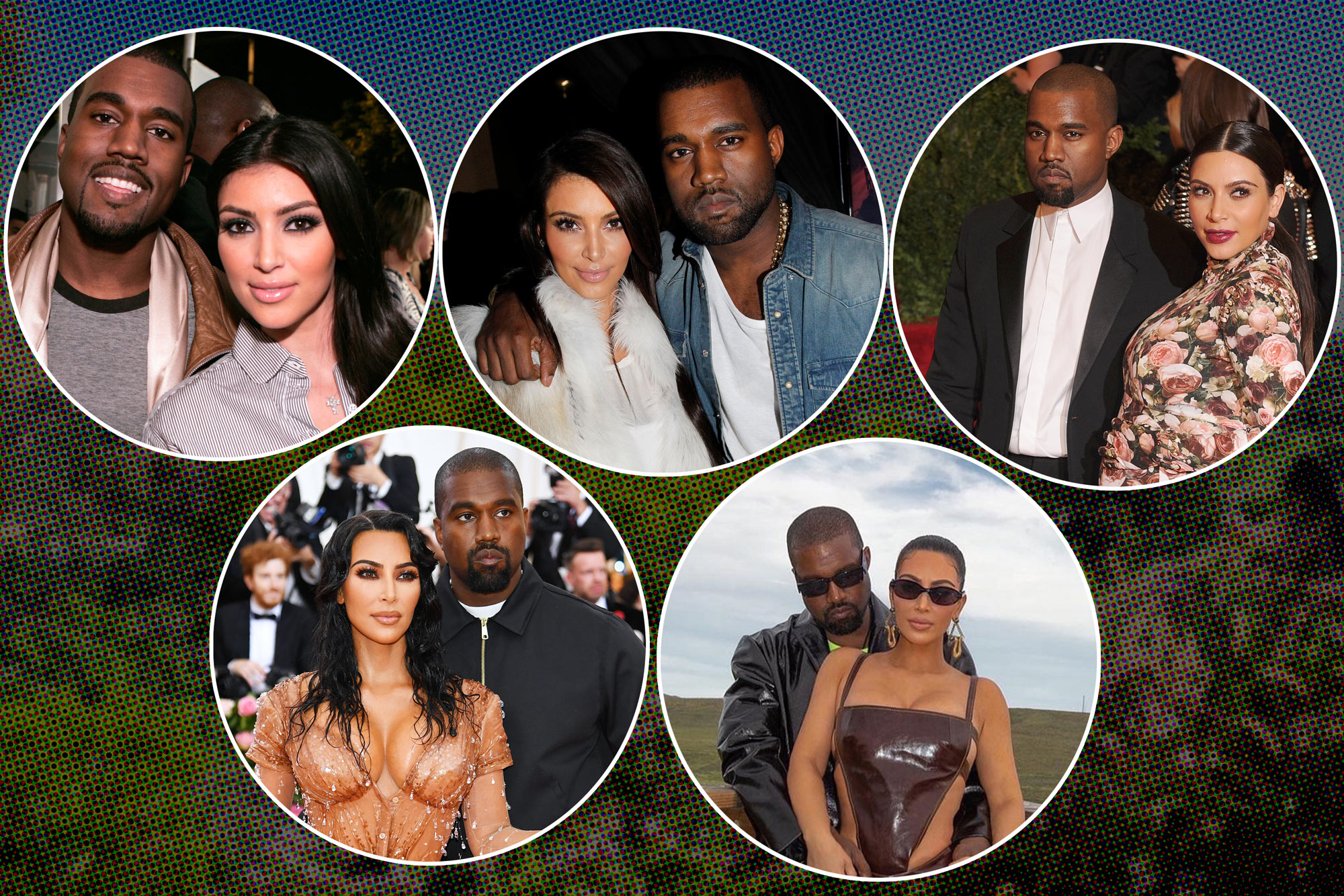 Kim Kardashian and Kanye West are headed for divorce, as 40-year-old Kardashian is reportedly “done” with West, 43.

“This divorce is happening because Kim has grown up a lot,” a source told Page Six. “She is serious about taking the bar exam and becoming a lawyer, she is serious about her prison reform campaign. Meanwhile Kanye is talking about running for president and saying other crazy s–t, and she’s just had enough of it.”

Indeed, the Wests have endured several ups and downs within their marriage, and even before they officially tied the knot in 2016.

Kim Kardashian and Kanye West in September of 2007.Getty Images

Kim Kardashian met Chicago-based producer Kanye West in 2003 while working as an assistant to R&B star, Brandy — who happens to be the sister of Kim’s ex and infamous sex tape partner, Ray J. The future mogul was married to songwriter Damon Thomas at the time, which still wasn’t enough for West to give up hope.

“I just knew I wanted her to be my girl for a long time,” he told Ryan Seacrest in 2013. “I remember I saw a picture of her and Paris Hilton, and I remember telling my boy, ‘Have you seen that girl Kim Kardijon?’”

In 2008, West insisted the reality star appear in his “Alligator Boots” hip hop puppet show as Princess Leia. One year later, his featured verse on Keri Hilson single “Knock You Down” implored the star to leave then-boyfriend, NFL star Reggie Bush, for him.

West made his first appearance on a “Keeping Up With the Kardashians” spinoff in 2010 when Kim and sister Kourtney invited the blossoming style authority to their NYC DASH Boutique in SoHo.

“Kanye and I have been good friends for a long time. He’s someone that we definitely respect his fashion taste and his style and so we wanted him to come check out the store,” Kim said during the “Kourtney & Kim Take New York” episode.

Unfortunately for the MC, Kim was dating NBA player Kris Humphries at the time.

Soon after, sisters Kourtney and Khloé dropped hints at a new romance between Kim and Kanye, with the pair all but confirming their relationship with several public appearances. By June of 2012, Kim proclaimed herself to be “a proud girlfriend.”

Kim Kardashian attends the 2013 Met Gala, while pregnant with her first child, alongside Kanye West.Getty Images

West announced that they were expecting their first child together during a 2012 New Year’s Eve performance, with Kim confirming the news shortly after.

“It’s true!! Kanye and I are expecting a baby,” she wrote on her personal blog at the time. “We feel so blessed and lucky and wish that in addition to both of our families, his mom and my dad could be here to celebrate this special time with us.

“Looking forward to great new beginnings in 2013 and to starting a family. Happy New Year!!! Xo”

One month before giving birth, the couple attended their first Met Gala together.

After a difficult pregnancy — through which she endured a lengthy divorce process from Humphries — Kardashian gave birth to daughter North West June 15, 2013.

West proposed to the new mom in October 2013, getting down on one knee at AT&T Stadium in San Francisco. One month later, Kardashian was featured in West’s steamy video for “Bound 2.”

Kanye West and Kim Kardashian on the cover of VogueVogue

After years of campaigning from West, he and his bride-to-be graced the April 2014 cover of Vogue magazine, with Kim calling the experience “the best day ever.”

Kim and Kanye’s first kiss as a married couple in 2014.Instagram, Kim Kardashian

The couple wed May 24, 2014 in Florence, Italy. The 200-person ceremony was captured by “Keeping Up With the Kardashians” cameras and featured the bride wearing a Maison Margiela gown while the groom wore Givenchy.

Their wedding photo (above) became the most-liked flick on Instagram in 2014.

One year later, the Wests announced that they would be expecting their second child after facing months of fertility issues. Kardashian gave birth to son, Saint West, Dec. 5 2015.

The birth was featured on an episode of “KUWTK.

The Wests vs. The World

Kim Kardashian was quick to defend her hubby when Taylor Swift accused the rapper of using her name disrespectfully in 2016 song “Famous,” backing his claim that Swift gave him permission to use the controversial line by posting Snapchat video depicting West getting asking Swift if he could mention her in the song.

“I feel like me and Taylor might still have sex / Why? I made that bitch famous,” he raps.

“All I gotta say is I am so glad my wife has Snapchat, ’cause now y’all can know the truth,” West said on-stage at the time. “Can’t nobody talk s—t about ‘Ye no more.”

During an October 2016 concert, West abruptly ended his performance citing a “family emergency.” It was soon reported that wife Kim was held up at gunpoint in a Paris hotel by two armed masked men dressed as police officers.

Just one month later, West was hospitalized after suffering a mental breakdown on-stage.

“He’s been suffering from exhaustion and sleep deprivation and went to the hospital today on his own will and under the consultation of his physician,” a source close to Kanye said at the time.

The couple reportedly spent Thanksgiving together in the hospital that year.

After spending some time under the radar, the couple confirmed in June 2017 that they hired a surrogate to carry their third child, as Kim was previously diagnosed with placenta accreta, making for a risky pregnancy.

Following his “slavery was a choice” comments, West confirmed his bipolar diagnosis and confessed in May 2018 song “Wouldn’t Leave” that he feared Kim would leave him after his several media outbursts.

“‘Slavery a choice, ‘ they said, ‘How, Ye?’ / Just imagine if they caught me on a wild day / Now I’m on fifty blogs gettin’ fifty calls / My wife callin’, screamin’, say, ‘We ’bout to lose it all!’ / Had to calm her down ’cause she couldn’t breathe / Told her she could leave me now / But she wouldn’t leave,” the lyrics read.

Last of the brood

The couple announced they would be expecting their fourth child — their second via surrogate — January 2019, welcoming baby Psalm West May 9, 2019.

The pair had a vow renewal ceremony shortly after Psalm’s arrival, which Kardashian revealed during an October 2019 episode of “KUWTK.”

The beginning of the end

West announced that he was running for president July 4, 2020 via Twitter, with Kim appearing to support his campaign, as she shared an American flag emoji in response to his tweet.

However, West’s stance on vaccines and abortion reportedly didn’t sit well with Kim and her family.

While expressing his pro-life views during a presidential rally, West revealed through tears that he and Kardashian once considered aborting her pregnancy with eldest daughter, North.

“Even if my wife were to divorce me after this speech, she brought North into the world, even when I didn’t want to. She stood up, and she protected that child,” he said before the crowd.

Kim was reportedly “mortified” at the public confession.

Soon after the rally, West accused Kim and her mother, Kris Jenner, of attempting to “lock him up” in a bizarre Twitter rant. He went on to say he wanted to divorce Kardashian and keep his children away from Jenner.

Kim responded by asking the public to be respectful of Kanye’s bipolar diagnosis.

“As many of you know, Kanye has bi-polar disorder. Anyone who has this or has a loved one in their life who does, knows how incredibly complicated and painful it is to understand,” she wrote. “I’ve never spoken publicly about how this has affected us at home because I am very protective of our children and Kanye’s right to privacy when it comes to his health.”

Kim Kardashian and Kanye West vacation in Wyoming with their kids, North, Saint, Chicago and Psalm in June of 2020Instagram

The pair attempted to work on their marriage during family trips to the Dominican Republic, Wyoming and Colorado’s Dunton River Camp.

“They decided to travel together so they can be away in private,” a source told People at the time, adding that the “focus is on their marriage.” The site also reported that Kardashian was “exhausted.”

“Between the kids, work, and dealing with Kanye’s bipolar episodes, it’s been hard for her to think clearly.”

Still, she was sure to support Kanye during his August run of gospel music series, “Sunday Service.”

Kim was also brought to tears when West presented the reality star with a hologram of her late father on her 40th birthday.

A December 2020 report claims Kim and Kanye are now living separate lives. Three weeks later, Page Six has confirmed that the pair are headed for Splitsville.

“They are keeping it low-key but they are done,” says a source. “Kim has hired Laura Wasser and they are in settlement talks. Kim got Kanye to go up there [Wyoming] so they could live separate lives and quietly get things sorted out to separate and divorce. She’s done.”