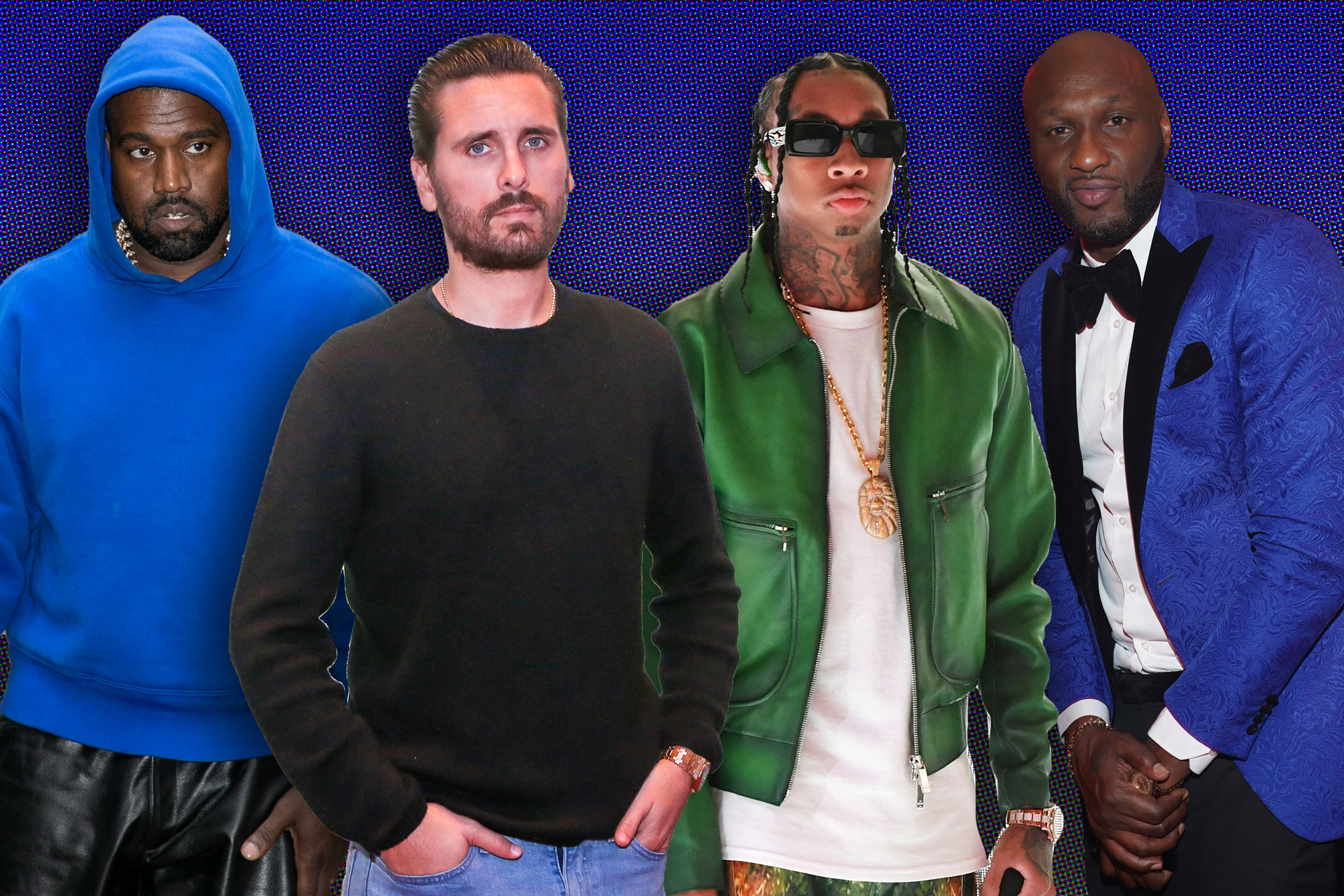 Add Kanye West to the list of victims that have fallen as a result of the “Kardashian curse.”

Although there’s no scientific evidence that the “curse” is real, the fact that the list of men—West being the latest addition—only gets longer continues to add to its folklore. Of course, Kylie Jenner acknowledging the fan-created theory didn’t help quash it.

“It’s everyone around us that aren’t used to [the media attention]. And we’re just like, ‘Oh, that’ll go away in a day.’ I know these stories aren’t going to matter, so don’t even let them affect you, you know?’” she explained to GQ in 2018, ironically while participating in an interview with now-ex-boyfriend Travis Scott.

“But it’s not just men—it’s friends, it’s people who come and just don’t know how to handle it. It’s the negative,” she continued. “There’s a lot of people who love us, but there’s also a huge handful of people who don’t like us.”

So who are the men that the Kardashian-Jenners may or may not have destroyed? Let’s take a look.

While Disick, 37, remains a staple of the Kardashian-Jenner family, he endured his ups and downs while dating Kourtney Kardashian for about nine years. He and Kourtney, 41, share three children together and might be the best example of amicable co-parenting in Hollywood, but he wasn’t without his troubles.

Throughout their courtship and even since their final split in 2015, Disick struggled with addiction, checking in-and-out of rehab facilities after excessive partying, and trauma stemming from his parents’ deaths, which only fueled his addictions.

In May 2020, Disick checked into rehab once more to “work on past traumas.” He checked out days later after an employee at the rehab facility leaked his private information.

He ultimately moved on with Sofia Richie, dating her for three years, but since has struck up a romance with Amelia Hamlin.

Khloé Kardashian and Lamar Odom’s courtship and marriage was the stuff of fairytales, until it wasn’t. After dating only a month, the two tied the knot in 2009. The former couple’s romance was documented on “Keeping Up With the Kardashians” spinoff, “Khloé & Lamar,” but like many reality TV curses, the show proved to be too much for the former NBA star.

Khloé filed for divorce from Odom in 2013 after he suffered a public breakdown for a year, became addicted to drugs and cheated on her. The two wouldn’t finalize their divorce until 2016, as Odom suffered a near-fatal overdose in a Nevada brothel in 2015 and Khloé chose to put the divorce on hold so Odom could benefit from her health insurance and she could take care of him as he recovered.

Although the marriage legally dissolved in 2016, Odom appeared to be holding on to some hope of reconciliation as he said in 2018 that he only realized the marriage was over when Khloé had moved on with other basketball players, such as James Harden and Tristan Thompson.

“I still got my shorty’s name still on me, her initials still on me,” Odom told BET’s “The Mancave.” “But for no reason. You know what I’m saying? I understand when it’s over, it’s over. When she was with her second or third NBA ballplayer, I could see that.”

This romance was likely doomed from the start. Kylie started dating Tyga after he had welcomed a child with Blac Chyna, Kim Kardashian’s-then best friend. The spider web was messy to say the least, but that didn’t stop these two from giving it a try.

The two first met at Kendall Jenner’s Sweet 16 bash when she was just 14 and he was 21, but they didn’t officially start dating—at least in the public eye (he denied dating her for a while)—until she was 17. When she turned 18, the “Rack City” rapper bought her a Ferrari.

Kylie, who wasn’t a billionaire yet but would go on to become one, had to endure embarrassing monetary foibles with Tyga, including the time in 2016 when a repo man took his Ferrari away for missing “a couple of payments” on his lease while Kylie shopped for a Bentley.

Missing payments were a staple of Tyga’s identity. A former landlord debated taking him to court for more than $180,000 worth of back rent and damages to an abandoned business space, while a jeweler lawyered up after Tyga failed to pay him a cent for the $200,000 worth of merchandise he allegedly purchased in 2013.

Perhaps the financial insecurity proved too much for Kylie, who split from Tyga for the last time in April 2017.

A 72-day marriage that will live in infamy.

The former NBA player and Kim started dating in October 2010 and would get engaged only seven months later. Three months later, they married in an over-the-top televised ceremony. Perhaps they should’ve slowed down, as the KKW Beauty founder filed for divorce fewer than three months later, which reportedly left Humphries feeling “bummed.”

The courtship appeared to be doomed from the start from a fans’ perspective, as Humphries didn’t make a great impression on “Keeping Up With the Kardashians,” and following the divorce, the vitriol only got worse.

“I thought to myself, ‘Why exactly are they booing me, though?” Humphries recalled in an essay for The Players’ Tribune in 2019 while writing about a particularly merciless booing during a game against Philadelphia. “Is it just because I’m That Guy from TV? Do they think I was trying to be famous? Is it because they think I disrespected the game of basketball?’” Humphries asked.

“The last one killed me, because all I’ve ever wanted to be known for was basketball.”

Khloé started dating the “Unforgettable” rapper in 2014 amid her pending divorce from Lamar. She later admitted that she jumped into a relationship with him because she was feeling “lonely and destructive” after her marriage crumbled.

“I jumped into something because I was just, like, lonely and destructive. But now I’m like, I just want to be alone,” she said on a 2014 episode of “Kourtney and Khloé Take the Hamptons.”

The on-again, off-again relationship continued into 2016, when Page Six exclusively reported they were secretly still hooking up.

Kylie and the “Antidote” rapper began dating in 2017, though much of their relationship was concealed because she went into hiding, fueling rumors that she was pregnant.

Sources confirmed to Page Six in September of that year that the Kylie Cosmetics founder was expecting her first child with Scott, and she announced in an 11-minute-long video that she had given birth to a baby girl in February 2018. She later revealed they named their daughter Stormi.

In October 2019, Kylie confirmed that she and Scott broke up, but they remained (and still remain) amicable co-parents. The former couple often post about each other and their daughter on social media; in December, Kylie shared pictures of Stormi and her dad working his food and toy drive.

When it came to monogamy, Khloé couldn’t catch a break.

After Lamar cheated on her throughout their marriage, Khloé eventually found romance with NBA player James Harden in the fall of 2015, though he seemed to suffer from the same commitment issues as Lamar, so they split in February 2016.

“I don’t want to put up with people — you want to be monogamous but then you’re not monogamous,” she said during an episode of the now-canceled “Kocktails With Khloé.” “I’ve always said it’s long distance … we don’t need to be monogamous. There’s a lot of s–t going on in both of our lives. You live in Houston. I live in L.A. Let’s see each other, when we see each other.”

Following the break up, Harden didn’t hold back on his Kardashian “curse” victimhood, opening up about all the attention negatively affected him.

“I didn’t like all the attention,” Harden told Sports Illustrated. “I feel like it was for no reason. I wasn’t getting anything out of it except my name out there and my face out there, and I don’t need that.”

After six years of marriage, Kim and Kanye’s are getting divorced.

The estranged pair began dating in 2012 and married in 2014 after welcoming their first child, daughter North West, a year prior. The would go on to have three more children, but the marriage faced its troubles. Kim was robbed at gun point in Paris, and not long after, Kanye would be hospitalized for his first breakdown.

Eventually, he revealed he was diagnosed with bipolar disorder. His mental health issues would prove difficult for Kim and her family, as Kanye would go on to reveal he wanted his wife to abort North, which “mortified” Kim.

Though an ex like Scott has remained close to the family, it doesn’t seem like Kanye will follow the same path, as he’s chosen to live in Wyoming full-time while Kim remains in LA with their children.