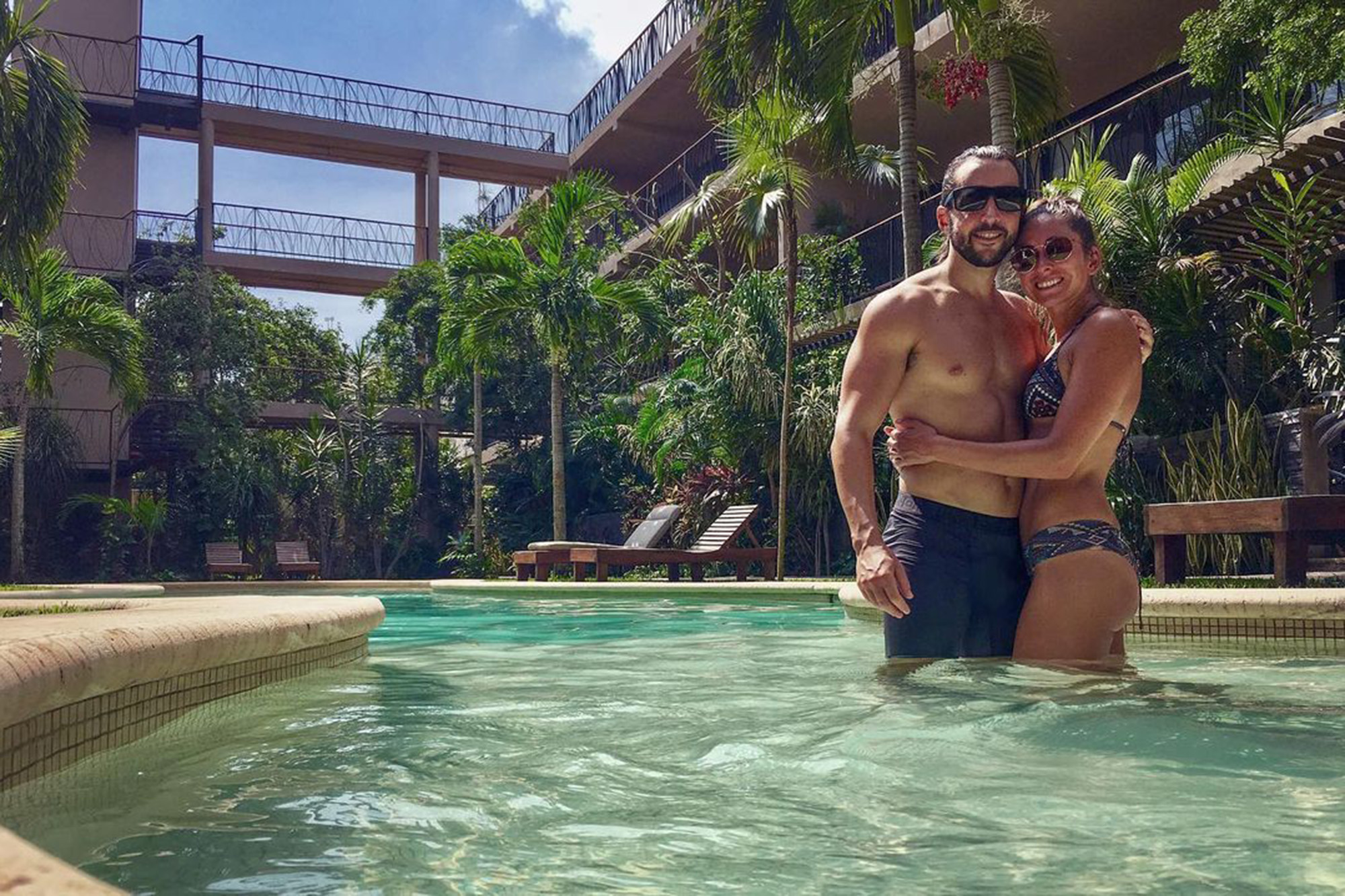 So naturally, after only meeting on Zoom, the pandemic-locked lovers relocated from Massachusetts to Mexico to live together — coming face-to-face for the first time in their Airbnb in Tulum.

A router romance deserving of the nickname “click-bae,” MacArthur and Crain meshed right away after being set up on a Zoom coffee date by a mutual friend in June.

“When Ryan’s face appeared on my screen, I felt attracted to him,” MacArthur, a life coach, confessed to CNN. “As we spoke, I realized he was as passionate about traveling as I was — before lockdown he went on a solo trip around the world.”

Crain, a wellness manager who’d sold all his possessions to travel the world in 2018, was just as impressed with MacArthur, who’d spent several weeks in Bali at the top of 2020.

“Although I went into the conversation thinking it would be more of a friend connection,” Crain said, “I did immediately notice how beautiful she was and I was very attracted to her.”

After “Zating” (Zoom dating) for a few months, in August, the digital darlings decided to ditch their desktops to make a human connection in Mexico, where air travel to and from the United States was permitted.

“A few weeks later, when both of us were fed up with being at home, we decided to go together,” MacArthur said.

Mexico has remained open to American travelers amid the global health crisis. However, the US Centers for Disease Control and Prevention advises against traveling due to coronavirus risks.

“When we met for the first time in our Airbnb living room, I remember thinking that she had a glowing energy,” Crain recalled of his initial encounter with MacArthur on Aug. 8.

“She had bought me . . . eggs and some fruit for breakfast from the day before, since she knew I would be getting in late,” he added. “She was kind and thoughtful.”

The couple kept their relationship casual at first.

But Crain was sure he’d fallen for his Wi-Fi Wonder Woman-turned-real life ladylove after only two weeks of living together and going on a magical excursion to the Isla Mujeres. He asked MacArthur on a date. She was hesitant.

“I wasn’t as sure if Ryan was the one for me,” she admitted.

It wasn’t until Crain left for a weeklong trip to Akumal, a small town on Mexico’s Riviera Maya, that MacArthur realized he was her forever man.

“While Ryan was away, all the pressure disappeared and I realized just how much I missed him,” she said. “During our time apart, I became clearer about my feelings — I wanted to give this a chance.”

Upon his return to their humble rental abode, Crain and MacArthur became a couple, making their relationship official beneath a double rainbow on a public beach in Tulum.

Rainbows and kisses aside, the pair’s paradise partnership still faced a number of troubles.

In addition to concerns from skeptical family members and friends who doubted the survival of their unconventional union, MacArthur and Crain lived together through three hurricanes — including tropical storm Gamma — floods, landslides, an electrical fire and a four-day water outage.

“Ryan was really thoughtful and affectionate the whole time, getting me ice cream and also picking up medicine for me,” she gushed.

Once on the mend, MacArthur and Crain spent the next two months exploring the Mayan Ruins of Chichen Itza and Bacalar. In December, the adventure addicts returned to the US to spend the holidays with family.

“Kayla has helped me to be more open, vulnerable and authentic and I’m so grateful we took this chance together,” Crain said of their high-risk romance.

“I always hoped to find the love of my life but I had no idea it would happen so quickly and during a global pandemic,” MacArthur added.

Despite the ever-changing domestic and international travel restrictions as Covid-19 continues plaguing the planet, the globetrotting boos have no sights on staying put.

“We plan to travel together and spend some time in San Diego, Lisbon, and Costa Rica — that’s our dream,” MacArthur said. “Perhaps we’ll even make it back to Mexico one day.”